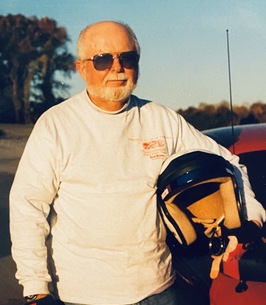 Mr.Richard D. Rumbold passed away on June 10th, 2021 at home, after an extended
illness

He was born and raised in Miami, Florida . He was a graduate of Miami High
School and attended Miami-Dade Community College . He served in the Naval
Reserves and received an honorable discharge .

He worked for over 50 years in the printing industry . After retiring, he worked
for Road Atlanta speedway as a ‘corner worker.’ He was a 26 year member of
the Sports Car Association of America (SCCA). As a volunteer , her served as
Chief of Grid , corner worker, and Pit worker, and Pace car chief for SCCA events.
He was an active member of Cornelia United Methodist Church , where he
served two terms on the Board of Trustees.
He was the co-founder of Pet Partners of Habersham, now called Peachstate Pet
Partners, inc.

He is survived by his wife, Deborah, of Cornelia, his son Richard Scott and his
wife Candace Rose, of Las Vegas . He also leaves behind three grandchildren and
nephew, C.J. Wilkie, of Miami . He leaves behind many friends and will be
reuniting with family and friends in his next journey.

A memorial service will beheld on Monday, June 21 st ,6 pm at Cornelia United
Methodist Church. Music will be by Don Bagwell , Cornelia. Prelude music will
be start at 5:30 by cellist ,Jeannie Leyden-Edwards , and violinist, Kelly Lehman.
The service will also be live-steamed on the church website.
In lieu of flowers or cards, he requested donations be made to Shriners Hospital
for Children, www.lovetotherescue.org , or Cornelia United Methodist Church,
275 Wyly Street. Cornelia Ga,30531

All rights reserved. This obituary is also archived at obittree.com